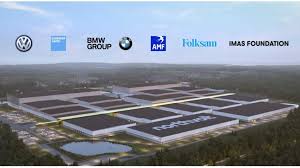 Volkswagen and Northvolt have created a 50/50 joint venture to build a factory for lithium-ion batteries, as it was initially announced in June.

Volkswagen holds 50% in the JV, but thanks to an additional 20% stake in Northvolt (part of the €900 million investment), German manufacturer seems to be in control of the entire project.

Here are the highlights of the deal:

part to acquire 20% of Northvolt

construction of the production facility is scheduled to start, at the earliest, in 2020