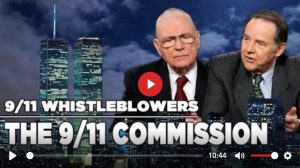 The 9/11 Commission and its final report are still held up as the final word on the events of September 11, 2001. But there's just one problem: Six out of the 10 commissioners have admitted that the commission was misled, stymied, hampered by conflicts of interest, and, ultimately, forced to participate in a politically-motivated cover-up. This is the story of the doubtful 9/11 commissioners.

Of all the 9/11 whistleblowers, perhaps the most noteworthy are the 9/11 Commissioners themselves.

The 9/11 Commission (formally "The National Commission on Terrorist Attacks Upon the United States") was set up by President George W. Bush, who dragged his heels a full 441 days before finally establishing a body to investigate the events of September 11, 2001, and "to prepare a full and complete account of the circumstances surrounding" them. But that remarkable gap between the events and the empaneling of the Commission was not due to mere laziness; Bush actively resisted any investigation for as long as he could, taking the extraordinary and unprecedented step of personally asking Senate Majority Leader Tom Daschle to limit Congress' investigation into those events.

It was only when the political pressure to form a commission of inquiry became too great for Bush to resist that he authorized the commission and nominated a chairman: Henry Kissinger.

REPORTER: Dr. Kissinger, do you have any concerns about once the commission begins it work and fingers point to valuable allies—say, Saudi Arabia for example—what policy implications could this have for the United States, particularly at this delicate time?

HENRY KISSINGER: I have been given every assurance by the President that we should go where the facts lead us.

Kissinger's reputation as a cover-up artist and tool of the political establishment was such that even The New York Times speculated that Bush's nomination of him showed that the president wanted to contain the investigation into 9/11, not enable it. 9/11 victims' family members, similarly concerned that Kissinger was being appointed to run a cover-up commission, challenged him to his face to release the client list of his political consulting business.

What I Learned From the Master of Propaganda – #PropagandaWatch