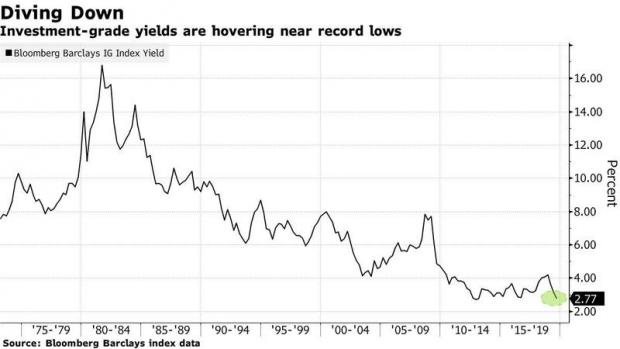 For the entire week, companies borrowed a total of $75 billion in investment-grade paper, the most for any comparable period since records began in 1972. Since Tuesday, corporations including Coca-Cola, Walt Disney, and Apple sold notes as yields have dropped.

The frenzy isn't letting up. According to Bloomberg and Bank of America, at least another $50 billion is projected for the rest of the month, with the activity expected to spill over to junk bonds and leveraged loans as well, and not even today's Ford downgrade to junk affecting $84 billion in debt, is expected to put a damper on the party.

The reason for the bond issuance frenzy? Rates have never been lower - according to Bloomberg Barclays index data, the average yield on bonds was 2.77% as of last week, effectively at all time lows, and almost 2% lower compared to late November, when that figure was above 4.3%. For a company selling $1 billion of debt, that amounts to $15.3 million of annual interest savings. Junk-bond yields have dropped too, with notes rated in the BB tier, the uppermost high-yield levels, paying a near record-low 4.07%.