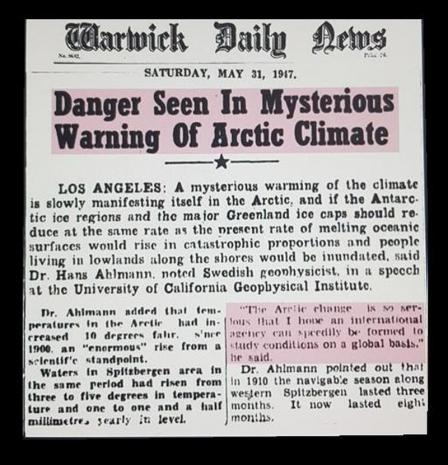 ANSWER: For whatever reason, these people have been promoting that the cities will all sink and we are the cause of it all.

They have been touting this scenario since the 1930s when there was the Dust Bowl. It resurfaced after World War II when they were trying to stop rebuilding industry and the housing market which had been destroyed. The same argument appeared again in the 1960s when there was a great expansion in housing.

However, during the 1970s when things got colder, everything flipped upside down and then it was global cooling that would destroy civilization.

On April 28, 1975, Newsweek magazine published an article in which they sounded the alarm bell and proposed solutions to deliberately melt the ice caps:

"Climatologists are pessimistic that political leaders will take any positive action to compensate for the climatic change, or even to allay its effects. They concede that some of the more spectacular solutions proposed, such as melting the arctic ice cap by covering it with black soot or diverting arctic rivers, might create problems far greater than those they solve. But the scientists see few signs that government leaders anywhere are even prepared to take the simple measures of stockpiling food or of introducing variables of climate uncertainty into economic projections of future food supplies."