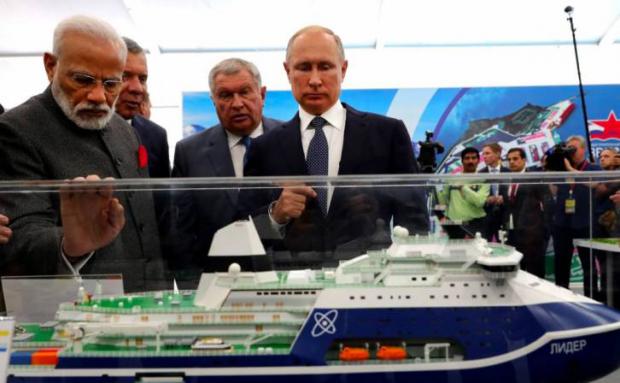 With interest, India is following the development of the Arctic region and is also ready to play an important role in the Arctic Council,» the declaration reads.

The document includes as many as 81 points and touches on a wide range of issues of joint interest. Energy cooperation is among the priorities.

During the visit, Indian companies H-Energy and Petronet LNG both signed memorandums of understanding with Russian natural gas company Novatek.

The agreements envisage joint investments in Novatek's future LNG projects, as well as LNG supplies and the establishment of joint ventures

India's rapid economic growth requires increasing demand for all sources of energy and, primarily, for natural gas as the most environmentally friendly type of fuel,» Novatek leader Leonid Mikhelson says in a comment.

The deals with the Indians pull the Russian energy company even further towards the Asian markets. From before, Novatek has concluded comprehensive and long-term agreements with both Chinese and Japanese companies. A key part of the LNG produced in both the Yamal LNG and Arctic LNG 2 projects will be destined buyers in the Asian-Pacific region.