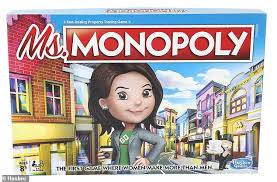 Ms Monopoly tells players 'Collect 240 salary as you pass GO, if you're a man collect 200' in what Hasbro, Inc. has dubbed the 'first-ever game in the Monopoly franchise that celebrates women trailblazers'.

The game, where women also get a $400 higher payout of $1,900 at the start, features tokens such as a pen, a jet, a glass, a watch, a barbell, or Ms. Monopoly's white hat, and a 'Boss' coffee-holding young brunette female character appears on the cover which reads: 'The first game where women make more than men'.

Featuring 24 Invention cards, the fresh take on the game replaces the image of the well-known top hat – wearing mature Mr. Monopoly who boasts a white mustache and waves a cane.

'Ms. Monopoly gives new meaning to the franchise, as properties are replaced by groundbreaking inventions and innovations made possible by women throughout history,' a Hasbro description reads.

'From inventions like WiFi to chocolate chip cookies, solar heating and space station batteries, Ms. Monopoly celebrates everything from scientific advancements to everyday accessories – all invented by women.'

Icelanders: Most Peaceful and Politically Conscious of People