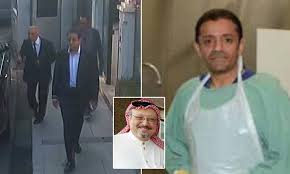 A full transcript of the recordings, published Tuesday, reveals how Maher Abdulaziz Mutreb, deputy leader of the hit-squad sent to silence Khashoggi, an Dr. Salah Muhammed Al-Tubaigy, who cut up his body, talked about the killing beforehand.

In the transcript Mutreb talks about stuffing Khashoggi's body into a bag, but Al-Tubaigy says he is too heavy and tall, so will have to be cut up and put into suitcases.

The transcript then reveals Khashoggi's final conversation with the two men and an unnamed accomplice, before he is drugged and has a plastic bag put over his head.

'I have asthma. Do not do it, you will suffocate me,' are Khashoggi's final words before the sounds of a struggle and his body being dismembered are heard.

While details from the tape have been revealed piecemeal in the 11 months since the journalist's death, the publication of the transcript by Turkey's Daily Sabah reveals the full picture of how the murder transpired.