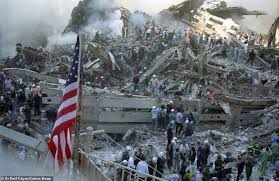 After seeing the towers ablaze on September 11, 2001, Dr Emil Chynn, who had been walking his dog, rushed to the site to see what was happening.

When he arrived he was surrounded by debris and smoke but rapidly got to work setting up what he claims to be the first triage center on site.

Over the following days, thousands of construction workers, first responders and volunteers gathered at Ground Zero to search for survivors and begin the long road to cleaning up the site, fires still raging and clouds of dust swirling in the air.

Eighteen people were freed alive from the rubble, one of them as late as 12.30pm on September 12, but thousands more were trapped. The death toll was 2,977 including the attack on the Pentagon and the fourth plane which was brought down by heroic passengers in Pennsylvania.