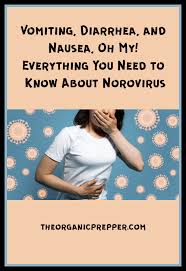 As people who plan to survive any possible coming disaster, we store food. We store food to help us get through whatever life throws at us, and so we can be more independent and rely less on others. We also store food for the peace of mind it affords us in knowing we aren't just days or weeks away from selling what we've worked hard to acquire; from begging to prevent our own starvation. We're taking responsibility for our own future and teaching our children and grand-children to do the same.

There is a hazard in doing this, however, if we don't do it 'the right way'; a hazard we need to always be mindful of, and take great care in preventing: Food Poisoning. Food poisoning is the result of pathogens in our food that consist of bacteria, viruses and/or parasites. According to the Centers for Disease Control, there are over 250 identified foodborne diseases. In a series of articles, I'd like to go over several of the most common foodborne illnesses, including how they're caused and how to prevent them, and several of the most dangerous foodborne illnesses.

Foodborne illnesses have always been around, but are becoming more common.

Simply put, more than likely, people have been getting sick from eating food for as long as we've been eating food. Looking back in time, there have been educated guesses as to what killed various peoples of importance. One article written by Ross Anderson states that University of Maryland doctors believe Alexander the Great died from Salmonella typhi; a summarization of which can be found in a 1998 article in the New England Journal of Medicine.

We need not go back that far to discover foodborne illnesses though.

The worst foodborne illness outbreak in recorded history, accredited so by the number of deaths, happened in 2011 in Germany where almost 4,000 people were infected with E.coli, and 53 people died, all from frozen strawberries. That same year, in the United States, a listeriosis strain that contaminated cantaloupe grown in Colorado caused another deadly foodborne illness outbreak, credited with being the third-worst in recorded history. It affected 147 people across 28 states, killing 33.

So why is this problem becoming more prevalent?

The CDC says 1 in 10 people are sickened with some type of foodborne illness daily, and estimates that each year 48 million people get sick from a foodborne illness, 128,000 are hospitalized, and 3,000 die. Why?