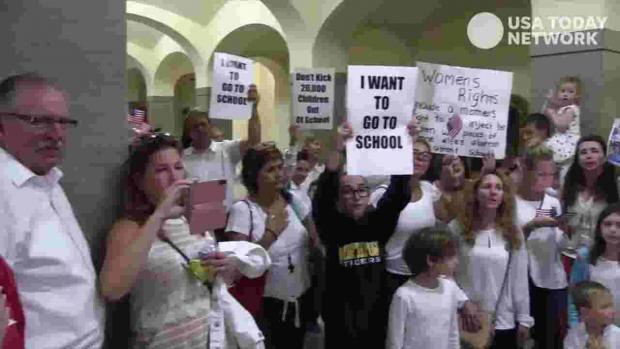 ALBANY – Giovanni Mazzarelli made it clear Monday: His kids will no longer go to a private school in Dutchess County. They will be home schooled.

The reason: a new law in New York that bans religious exemptions from vaccinations for students who want to attend public or private schools.

"There is no way, no how they are getting vaccinated. So we're forced to home school," he said during a protest outside the state Education Department building, where the state Board of Regents was meeting.

"My kids are basically evicted from school because of this New York law."

Several hundred parents and their children rallied Monday in protest of the new law and discussed how they will proceed if the new law isn't eased or if their court challenges aren't successful, which they have not been so far.

Some will quit their jobs and home school their children. Others will send their kids to school regardless of the law, forcing the hand of administrators to make the students leave.

A few parents said they will likely move out of the state, while others were still unsure what they will do when a 14-day grace period for the beginning of vaccines to start expires later this month.

"A lot of us are talking about civil disobedience, sending our kids and seeing what happens," said Tresea Snyder, a mother of three from Sherrill, Oneida County.

"They'll probably send them to the office and call a parent to come pick them up. But we're trying to teach our kids that when you believe in something, stand up for it and you have to make noise."

As the Board of Regents met Monday, vaccine protesters could be heard loudly chanting in the hallways. The chants permeated the Regents Room as well as an online stream of the meeting.

They packed a corridor inside the Education Building, and more opponents railed outside near the windows of the ornate meeting room.

The Truth About Vaccines (TTAV) streams tomorrow… and with coronavirus vaccines