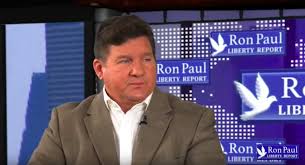 Officially, it was because he used the word "retarded" to describe the odious establishment propagandist Sean Hannity after noting the hilarious fact that the Fox News host had been wearing a CIA lapel pin while "challenging the deep state". Unofficially, it was because McAdams has been operating for years at the apex of one of the most effective antiwar movements in the United States.

An article from Liberty Conservative News about McAdams' encounter with the business end of the Twitter censorship hammer reports that the outspoken foreign policy critic received a notification that his account "has been suspended and will not be restored because it was found to be violating Twitter's Terms of Service, specifically the Twitter Rules against hateful conduct."

"It is against our rules to promote violence against or directly attack or threaten other people on the basis of race, ethnicity, national origin, sexual orientation, gender, gender identity, religious affiliation, age, disability, or disease," the notification reads. "Additionally, if we determine that the primary purpose of an account is to incite harm towards others on the basis of these categories, that account may be suspended without prior warning."