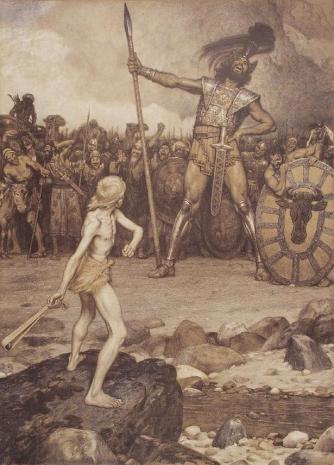 David, an Israelite, defeated Goliath, a Philistine giant, in single combat in one of the most famous episodes of the Bible.

With little evidence to support the legend, its origins have proved mysterious – yet now a new discovery could shed light on the tale.

Archaeologists excavating Goliath's hometown, Gath, have unearthed a new layer of ruins dating back to the time of the biblical battle – and they're unusually large.

Excavation director Aren Maeir, of Bar Ilan University in Israel, said the discovery came as a surprise after 23 years.

He said: "We now know the size and impressive nature of the early Iron Age city is quite different than previously thought.

"It was assumed the city reached its large size during the 10th and 9th century BC.

"It now appears that the early Iron Age city – 11th century BC and perhaps before – may have been even bigger and more impressive.

I am completely in line with believing everything that the Bible says, BUT >>> Consider all these archaeological finds everywhere. Some of them take decades or longer to excavate properly. The point? That's enough time to literally MAKE whatever you want the find to show. What if 90% of the archaeologic finds are "sculptures" or some other fabrication, rather than finds? All it takes is a bunch of people sworn to silence before they start to dig - I mean, to sculpture. Most of them didn't know that they were sculpting when they started. And after they found out, they are under contractual threat to not reveal what they are really doing. Besides, a lot of the diggers are college students, digging for free, as part of a program to get their doctorate or whatever.