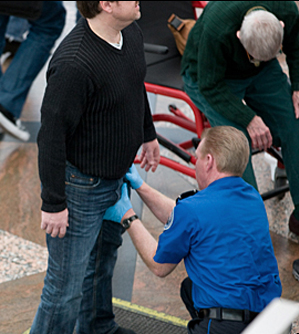 This is great news for those of us who are absolutely fed up with the rampant invasive and humiliating screenings at the hands of TSA agents.

You know what? Let us call those "screenings" what they often are: Sexual assaults, under the guise of "security."

Anyway, back to the story…

In a 9-4 decision, the 3rd U.S. Circuit Court of Appeals in Philadelphia said Transportation Security Administration screeners were "investigative or law enforcement officers" for purposes of searching passengers, waiving the government's usual immunity from lawsuits.

Circuit Judge Thomas Ambro said the "intimate physical nature" of airport screenings brought them within the ambit of law enforcement, allowing travelers to pursue some civil claims under the Federal Tort Claims Act for intentional wrongdoing.

He downplayed concern that the decision would open the floodgates to litigation, saying that in 2015 fewer than 200 people, out of more than 700 million screened, filed complaints that might trigger the waiver. (source)

The judges rejected the government's argument that airport screening is different from a search because airline passengers consent to it. They said it's indeed a search – noting that screeners can search a passenger's entire body, including sensitive areas.

The court's decision reversed a July 2018 ruling by a three-judge 3rd Circuit panel.

This decision is a victory for people who have been assaulted by the TSA.

It is a win for people like Nadine Pellegrino, who with her husband sued the TSA for false arrest, false imprisonment, and malicious prosecution over an incident that occurred in 2006 at Philadelphia International Airport, Reuters reports:

Pellegrino, then 57, had objected to the invasiveness of a random screening prior to her scheduled boarding of a US Airways flight to Fort Lauderdale, Florida, and was accused of striking a TSA officer.

She was eventually jailed for about 18 hours and charged with assault, making terroristic threats and other crimes, which she denied. Pellegrino was acquitted at a March 2008 trial.

"If you think you are a victim of intentional misconduct by TSA agents, you can now have your day in court," her lawyer Paul Thompson said in an interview. "Nadine never gave up, and it is a real tribute to her courage." (source)

After she was randomly selected for additional screening, Pellegrino says Transportation Security Administration officers at brought her bags to a private room because she requested discretion.

Once the search, concluded, however, Pellegrino allegedly informed the officers that she planned to report them to her supervisor for excessive conduct. She says they went through her cellphone, counted her coins and currency, smelled each and every one of her cosmetics, and otherwise damaged her property during the ham-fisted search.

It was while Pellegrino was cleaning up the mess of her belongings, she says, that the officers then accused her of striking them. Federal prosecutors in turn brought 10 criminal counts against Pellegrino, only to abandon the case when TSA could not provide any surveillance video of the incident. As for the officers' testimony, one failed to appear in court and the other was unable to keep the story straight. (source)

Pellegrino and her husband asked the TSA for $951,200 in damages. When their claim was rejected, they sued the TSA and three TSA employees.

James Corbett On The FALL Of Empires & The Coming Cashless Society!

Brave New World vs 1984: Huxley Tells Orwell "I Was Right"

Everybody's Talking About It

Send In The Clowns: Deconstructing The Nevada Democrat Debate