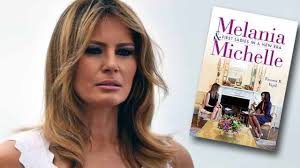 A new book comparing Melania Trump and Michelle Obama has brought out predictable slaps against the current first lady from bullies who seek to attack the president through his family.

Pitting two women against each other just never gets old, does it?

"Melania & Michelle: First Ladies in a New Era," by Tammy R. Vigil, is presented as a mere bipartisan assessment of the public images of both women.

But it thinly veils its criticism of one and its admiration of the other. No prizes for guessing who's who.

Vigil, a Boston academic, notes that Melania "ranks among the least liked of all modern first ladies, [and her] professional life prepared her to serve more as a visual adornment."

The afterword belatedly acknowledges that "pitting the two women against one another is a troublesome (though common) practice."

But, hey, if it damages the Trumps, go for it.

The Daily News got the message about who is more impressive: "Michelle was a polished attorney and huge asset to Barack; Melania, a top model, is nearly invisible," goes the headline promoting the book.

Vigil declares that Melania's "difficulties" are exacerbated because she "followed a popular and competent first lady" in Michelle Obama.

After writing an entire book comparing the two first ladies — one only halfway through her first term with a wildly hostile media and the other who completed two terms — Vigil concedes that "directly contrasting these women is fraught with challenges."

New York attorney general questions Eric Trump under oath in investigation into whether ...

Glamorous Ivanka lauds her father for signing an executive order for federal agencies...

Melania Trump was in no rush to move into the White House.

"This Was Some Shady Stuff": Treasury Department Spied On Flynn, Manafort And Trump Family

Melania Trump, once a reluctant campaigner, is hitting the trail

'We will end this evil scourge': Ivanka Trump...

Donald Trump Jr slams The View Host Sunny Hostin by asking what it's like to be...

Jr. Is On Our Side