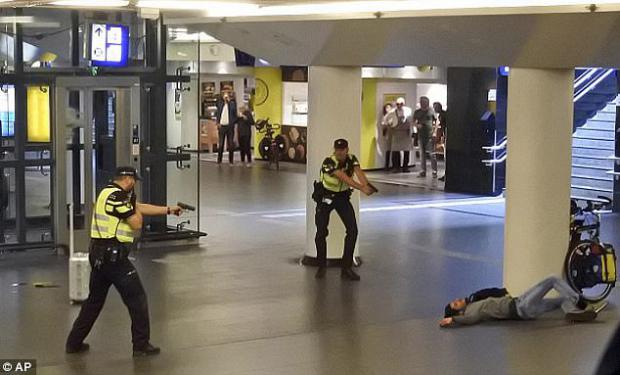 An Afghan man suspected of stabbing two American tourists last year at Amsterdam's Central Station has told judges he travelled to the Netherlands 'to protect the Prophet Mohammed'.

Jawed Santani, 20, appeared at a two-day hearing in a heavily fortified courtroom in Amsterdam, where he faces two attempted murder charges with the aim of committing an act of terror.

'I came to the Netherlands to protect my prophet,' he told the judges in reference to the August 31 incident last year that sent midday commuters into a panic and left two severely injured victims.

'I was planning to kill unfair and cruel people, those who make it possible for the Prophet Mohammed to be insulted,' national news agency ANP quoted him as saying.

Santani previously mentioned anti-Islam politician Geert Wilders, and his knife assault came a day after the far-right MP announced he was cancelling moves to stage a cartoon competition to caricature the Prophet Mohammed.

Wilders pulled the plug on the competition at the time saying he wanted to 'avoid the risk of making people victims of Islamist violence'.