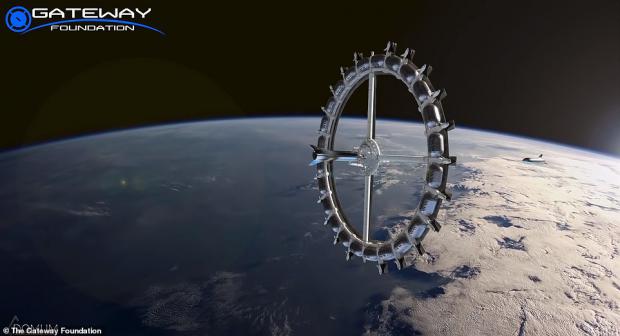 Designs for the first commercial space hotel that will be like a 'cruise ship' have been unveiled and they are truly out of this world.

The Von Braun Space Station is being designed by the Gateway Foundation's Tim Alatorre and will have gravity,  full-working kitchens, bars and natural feeling interiors.

It is expected to be 'operational by 2025 with 100 tourists visiting the station per week,' according to the senior design architect for the project.

Just like Zenon: Girl of the 21st Century envisioned a world ready to live in space, soon travelers will get to enjoy their very own galactic vacation up in the stars in the hotel which looks strikingly similar to the space station in the 1999 Disney movie.

'Eventually, going to space will just be another option people will pick for their vacation, just like going on a cruise, or going to Disney World,' Alatorre explained to Dezeen. 'The goal of the Gateway Foundation is to have the Von Braun operational by 2025 with 100 tourists visiting the station per week.'