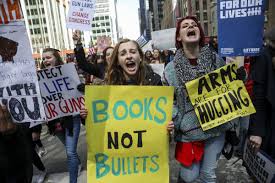 After each mass shooting, there is an outpouring of emotion. Grief. Shock. Sickness. Anger.

We saw all of these in the wake of the recent shootings in El Paso, Texas, and Dayton, Ohio. And because the issue is politically charged, we saw lots of blame. Democratic presidential candidates blamed the president and his Twitter rhetoric. The president blamed video games.

Yet, despite what you may have heard, the frequency of mass shootings hasn't changed much over recent decades.

In fact, such shootings are rare and account for a tiny fraction of overall gun deaths in America.

About 33,000 people are fatally shot in the U.S. each year. About two-thirds of these deaths are suicides. Another third of these are homicides, which have been steadily declining for decades.