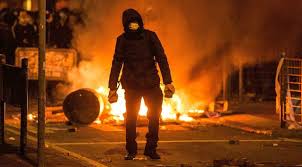 There's always an 'emergency' the establishment wants us to fear and panic about, to distract us from the real threats.

"Pay no attention to the man behind the curtain."

The arctic is melting! The polar bears are dying! The 'Earth's Lungs' are burning to a crisp!

Well… maybe not so much. Now that the dust has settled, we know that everything the alarmists have been saying about the Amazon is wrong. The dramatic photos shared by celebrities of the fires in Brazil weren't what they appeared to be, and the same people who love citing government science on "Climate Change" are now conveniently ignoring government science since it came out that the fire activity "has been close to the average" for the region.

Of course, facts won't stop their agenda to make you pay carbon taxes. The powers that shouldn't be will keep scaring you with lies. The stage is now set.

They're using these fires in Brazil (which are mostly farms, not forests) as yet another ploy to normalize "global government" as the only workable solution for the crises they cause. If you really care about preserving the Amazon rainforest, and you want to take action to improve the environment (including your own community), try to be mindful of the rampant disinformation and hysteria.

I break down what you need to know in my latest 'walk and talk' vlog from Playa del Carmen, Mexico.