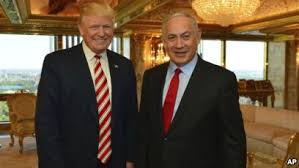 President Donald Trump, who canceled a missile strike on Iran, after the shoot-down of a U.S. Predator drone, to avoid killing Iranians, may not want a U.S. war with Iran. But the same cannot be said of Bibi Netanyahu.

Saturday, Israel launched a night attack on a village south of Damascus to abort what Israel claims was a plot by Iran's Revolutionary Guards' Quds Force to fly "killer drones" into Israel, an act of war.

Sunday, two Israeli drones crashed outside the media offices of Hezbollah in Beirut. Israel then attacked a base camp of the Popular Front for the Liberation of Palestine-General Command in north Lebanon.

Monday, Israel admitted to a strike on Iranian-backed militias of the Popular Mobilization Forces in Iraq. And Israel does not deny responsibility for last month's attacks on munitions dumps and bases of pro-Iran militias in Iraq.

Israel has also confirmed that, during Syria's civil war, it conducted hundreds of strikes against pro-Iranian militias and ammunition depots to prevent the transfer of missiles to Hezbollah in Lebanon.

Understandably, Israel's weekend actions have brought threats of retaliation. Hezbollah Secretary-General Hassan Nasrallah has warned of vengeance for the death of his people in the Syria strike.

Last Friday, in the 71st week of the "Great March of Return" protests on Gaza's border, 50 Palestinians were wounded by Israeli live fire. In 16 months, 200 have died from gunshots, with thousands wounded.

America's reaction to Israel's weekend attacks? Secretary of State Mike Pompeo called Netanyahu to assure him of U.S. support of Israel's actions. Some Iraqi leaders are now calling for the expulsion of Americans.