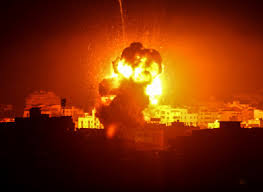 The focus of the piece was Dr. Adnan al Borsh, a surgeon, who described in precise English the explosive nature of the wounds and his efforts to save young Palestinians, captured by a photograph of him falling asleep in an operating room chair at 1 a.m. on May 14, 2018, the day that Israel killed over 60 protesters.

The sympathy of the piece was entirely with young men who had once loved to play soccer in their open-air prison. Ferguson:

Most of these kids have never seen the outside world, trapped in a tiny strip of land under blockade by the Israeli government and ruled over by the militant group Hamas.

I watched this report last week as a rapt amateur, with my heart in my throat. Another excerpt:

Ferguson: Waleed and his friends say they were unarmed, protesting near the border fence, when he was shot by a sniper.