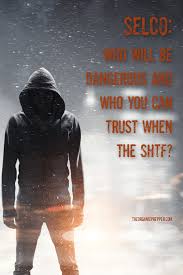 We are all witnessing how the world is becoming a more dangerous place. Actually what we are seeing is that people have a tendency to be more dangerous, or to be more precise – sicker and more perverse.

One of the reasons is that we are able to access information faster than 30-40 years ago, for example. If you have something wrong happening in another part of the world you will know about it pretty soon. You just need to do a couple of clicks with your mouse.

The world is a dangerous place to live if you do not follow some rules, and very often those rules are actually not rules that system "gives" us as rules of behavior.

Often you need to create your own set of rules and stick to them to be safe and in order for your family to be safe. SHTF or no SHTF.

The latest news about rich and powerful folks being able to manipulate and use young girls is horrible news, but it is nothing new. You just heard about it this case. Unfortunately, there are many events like that all around. We just never hear about them so it is like they have not happened.

All that is horrible, but I would like to point out here one very important thing:

The system allowed that man (and others) to do what they did.

Well, it is simple. Because they are powerful,  they can get out and do a lot of things most of us could not get away with.

How all this can be transferred to our preparations for SHTF?

Actually, the SHTF that I went through had a lot of similarities, so for example, if you were powerful during that time you could do whatever you wanted – including a lot of sick and perverse things.

Another commonality between a warlord in the middle of the SHTF and this very rich dude in "normal" times is that neither of them is worried about repercussions or punishment.

In the SHTF time, a man did not worry about it because there is no law, and even if there is some, he had enough firepower to deter it.

In the other case – the current one – a man who is so rich and connected has enough power to bypass the law, to make the law invisible for him.

Would We Still Have Power and Water If We Had a Massive Coronavirus Quarantine in the US?

VENEZUELA: Imagine How Devastating a Pandemic Would Be AFTER the SHTF

How to Handle DOOM FATIGUE About the Coronavirus

Protect your property when SHTF: Perimeter defense tips for your homestead

The WHO Fumbles 'Pandemic Preparedness' for Coronavirus

What I Bought to Prep for a Wuhan Coronavirus Lockdown

SELCO: It's Not the Virus You Need to Worry About. It's the System

Homesteaders, catastrophists run for the hills to flee U.S. uncertainty

PPE for a Pandemic: A Guide to Personal Protective Equipment and Masks

Wuhan Coronavirus Hits the US: What Preppers Need to Know

Think the Government Will Save You? Puerto Ricans Find Warehouse FULL of Emergency Supplies Stashed