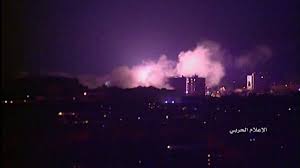 The apparent assassination attempt failed, however, when one Israeli drone fell from the sky, crashing into a south Beirut neighborhood, and another exploded near the ground in the early hours of Sunday. Hezbollah indicated its forces had "downed" the first drone, possibly through electronic intercept.

The second drone struck near Hezbollah's media center, and may have either been targeting this building or possibly had been seeking to take out Hezbollah commanders.

Lebanon has slammed the Israeli aggression after the invasion of its airspace, and will take the case before the UN, while Israel has yet to comment. According to a statement cited in Reuters, the second drone had been packed with explosives:

The Lebanese army said that one Israeli drone fell and another exploded at 02:30 am local time (2330 GMT), causing only material damage.