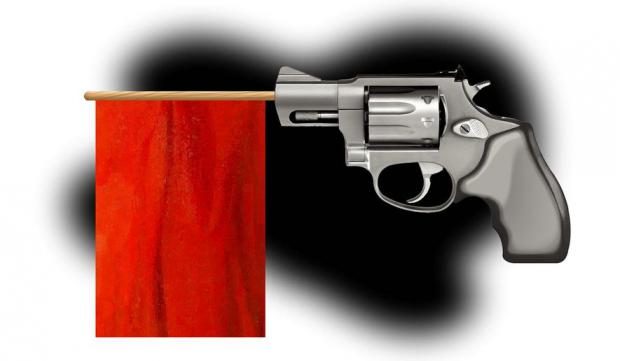 No crime has to be committed to trigger an investigation or confiscation.

Hopefully you'll never commit a mass shooting, murder, or violent assault. But while you might not have a criminal connection to such individuals, you do share at least one thing in common: you both have unalienable rights. The right to face your accuser. The right to due process. The right to protection against unreasonable searches and seizures. Every one of these rights are explicitly violated under red flag laws. (source)

What could possibly go wrong?

Just ask Brandon Wagshol and his dad, from the anti-gunner haven state, Connecticut.

Before I write anything else, let me be clear. Wagshol is not some squeaky-clean, innocent angel. He wrote some vile racist and transphobic tweets. He also seemed to taunt the FBI in his tweets, which certainly isn't the smartest thing in the world to do. That being said, holding bigoted views is not the same things as acting on those views. Voicing his bigoted opinions, while disgusting, is not a criminal act. The First Amendment protects his right to voice his hate in the same way that it protects flag burning. No one has to like it, but it's not a criminal act.

Wagshol may also have been caught in a few lies made on Facebook. According to Norwalk police Lt. Terry Blake:

A Facebook page for the younger Wagshol said he was a former U.S. Marine and worked at the Department of Homeland Security as a janitor. Blake said both of these statements on Facebook are untrue. (source)

Finally, Wagshol did admit to ordering a kit to build an AR.  A lot of preppers and gun enthusiasts have done the exact same thing. That's more than understandable with the government chomping at the bit to enact more gun control.  Wagshol will likely be in legal trouble in CT for that too.

This is where a "concerned citizen" stepped in. Wagshol shared a meme on Facebook that someone found scary.