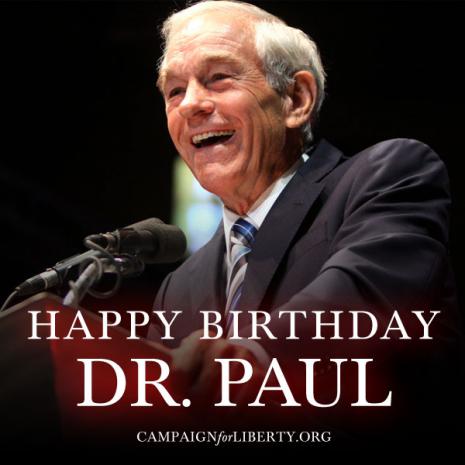 The remarkable life of Ron Paul began in Pittsburgh 84 years ago today, in 1935—seven months after Elvis Aaron Presley came into the world. We wish him a very happy birthday, and many more years of health and productivity.

It's a rare person who peaks later in life, but Dr. Paul manages to do just that. Anyone who meets him notices his energy, his distate for waiting or standing still, honed by decades as a doctor. In his eighties he is exceedingly fit, riding his bike, walking, tending his garden, and frequently hosting family and guests at his home. His daily Liberty Report, live on YouTube, provides an excellent outlet for his pro-peace message without the constraints (and tedious travel) of Congress.

Born into the teeth of America's Depression, young Ron was fortunate that his father's dairy business survived very tough times in the Steel City. His early years found him racing back and forth from the delivery truck early in the morning, in all kinds of weather, replacing empty bottles with fresh milk and cream. This earned him a few cents, as did cleaning bottles and inspecting eggs with a special lamp to discard those with blood spots. His work ethic carried over into a notable high school career as a track athlete, where he set the Pennsylvania state record in the 200 meter dash. During those same years in Pittsburgh he was doubly fortunate to meet his future bride Carol Wells. A teenage Carol summoned up the courage to ask him, in 1952, to escort her to a Sadie Hawkins party for her 16th birthday.

They've been together ever since, and married more than sixty years. The couple sits atop of a family pyramid of children (5, including 3 MDs), grandchildren (19), and great granchildren (10 and counting). Ron points out that none of his children graduated from college with debt.

Medicine was his calling, so after Gettyburg College in Pennsylvania the Pauls headed off to Duke medical school in the late 1950s. The Korean War interrupted toward the end of his residency, so rather than facing buck-private status as a draftee Ron reluctantly enlisted in the Air Force as a flight surgeon. His rationale was simple: intead of carrying a rifle and killing peope, he would be a healer.

He likes to recall a memorable moment from his Air Force years, during a refueling stop in Afghanistan. A superior office looked up at the Khyber Pass mountain, and said, "See those mountains? These people have never been conquered." Quite a prescient moment, considering what the Soviet and American incursions into that country would bring decades later.

I had the great fortune to meet Dr. Paul in 1988, as a young college student enthused by his first presidential campaign (on the Libertarian Party ticket). The crowds were small back then; a poorly-lit meeting room in a downscale Ramada Inn in Santa Ana, California hosted maybe 40 of us. Cell phones and email didn't exist, and thus organizing a third-party campaign on a shoestring budget was not easy. But Ron persevered, getting quite familiar with Southwest Airlines and budget motels. He was laying the groundwork—after years in Congress, countless small gatherings, and endless appearances on tiny media outlets—for bigger things many years later.

I stayed in touch with Ron through his campaign manager, the late Kent Snyder. Kent, a quiet hero who died far too young, would go on to lead Ron's much bigger and better 2008 presidential campaign. Sadly Kent missed out on the 2012 campaign. But I recall one early evening that year, a few hours before an important CNN debate in Washington DC at Constitution Hall. Mitt Romney was huddled nearby in a hotel suite with dozens of staffers and advisors, doing last minute testing of words and phrases and thinking about how to evade or deflect questions. "What tie to wear? How does my hair look? Will Wolf Blitzer ask us about healthcare first? Will anyone bring up Massachusetts?"

Ron, by contrast, was utterly unperturbed as he enjoyed a simple can of soup in his condominium. He already knew how he would answer any questions thrown at him, and didn't need to worry about obfuscating or contradicting past statements. It wasn't about him, it was about the message. His distinct lack of parsed words and smooth talking were in fact what attracted so many people to that message. He never sounded like a politician.

His consistent philosophy meant Ron didn't pander to particular audiences. He advocated drug legalization, for instance, despite running for Congress in a conservative south Texas district. And he advocated it on the grounds of personal liberty and sovereignty over one's body, not just the bad societal effects of prohibition. His opponent in the 1996 congressional election, the late Charles "Lefty" Morris, tried to paint him as a dangerous libertarian. But Ron was too well-known as an obstetrician throughout the district; with his white lab coat and All-Amercan family he was anything but a radical. I recall dining with him in restaurants several times when someone would approach the table and say, "Hi Dr. Paul, you delivered me!" This was a huge political advantage, and a lesson for candidates. In fact he delivered roughly 4,000 babies over his career, and his daughter Joy carries on the tradition in her OB-GYN practice.

Note: The views expressed on Mises.org are not necessarily those of the Mises Institute.

The Best of Jeff Deist

Who Targeted Ukraine Airlines Flight 752? Iran Shot It Down But There May Be More to the Story

The Garbage Crisis in Venezuela: Sanitation Issues When the SHTF

Housing Starts Soar To Highest Since 2006 As Permits Plunge