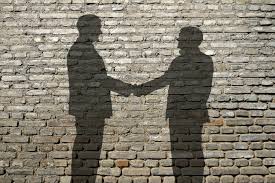 Big Tech has come under fire quite consistently for privacy concerns and has even faced big fines for violations (which they can afford). It seems that public attention on this matter has forced them to start going underground, with secret back-end deals with the government at local levels to expand their surveillance capabilities.

If you haven't heard, there is a very useful doorbell camera called Ring. Ring started out as a product called, Doorbot, on the Shark Tank TV show but was rejected. The owners got immediate exposure and millions of dollars from investors after the show, changing the name from Doorbot to Ring. Fast forward five years, and Amazon decides to compete with Google's friendly surveillance system called Nest, and buys Ring for A Billion Freaking Dollars.

Ok, so what? It's a very useful thing to be able to see who's at the door and have a record of someone breaking into your home. The systems, in themselves, aren't an issue. It's when governments start to get involved and big money starts being made that conflicts of interest can lead to misuse and violations of privacy.

It's these very expansions outside of the homeowner's benefit that need scrutiny.

In addition to the actual doorbell surveillance camera itself, Ring/Amazon added a handy online app called, Neighbors, to use these systems to help reduce crime. According to Jamie Siminoff, Chief Inventor and Founder of Ring,

"At Ring, we come to work every day with the mission of reducing crime in neighborhoods. Over the past few years we have learned that, when neighbors, the Ring team and law enforcement all work together, we can create safer communities. Neighbors is meant to facilitate real-time communication between these groups, while maintaining neighbor privacy first and foremost. By bringing security to every neighbor with the free Neighbors app, communities can stay on top of crime and safety alerts as they happen."

That sounds very good, doesn't it? This may not seem all that much of an issue on the surface (if we ignore the obvious conflict of interest), but let's dig deeper…

In addition to a system that allows people to monitor their homes, and then has expanded to help them monitor their neighborhoods, they've also developed a government-only backend portal to this system that they provide for free.

According to this article,

"Ring, Amazon's home security company most known for its doorbell camera, has been quietly creating a massive private surveillance network. The company has formed partnerships with at least 225 law enforcement agencies, enticed cities to finance discounts on its cameras with taxpayer money, and worked with police to organize package theft sting operations in several U.S. cities."

This portal not only gives the government backdoor access to the Neighbors app to directly contact users, they also have a map of all cameras in the area that they can access.

But it gets worse.

Ring is starting to leverage these backdoor agreements to require these agencies to help them expand their network. According to another article from someone who received private communications between Ring and government agencies, "Police are contractually required to …

"Engage the Lakeland community with outreach efforts on the platform to encourage adoption of the platform/app."

To assist in that endeavor, Ring is coaching agencies, by way of an assigned Ring Partner Success Associate, on how to leverage social media and community outreach programs to expand their reach by,

Here is an example of one, obtained by an investigator/staff writer at motherboard:

and from obtained correspondence to that same police department,

"You are doing a great job interacting with them and that will be critical in increasing the opt-in rate."

"The more users you have, the more useful the information you can collect," the representative added.