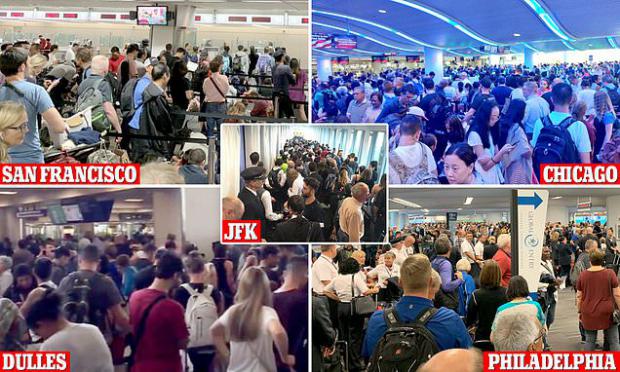 The U.S. Customs and Border Protection's system is back online after crashing on Friday evening

Philadelphia, San Francisco, Dulles in Washington D.C. and the Boston airport were among others impacted bu the crash

The U.S. Customs and Border Protection's system is back online after crashing on Friday evening and causing massive delays at airports across the country.

'The affected systems are coming back online and travelers are being processed,' the CBP said in a tweet at 6.37pm ET. 'CBP will continue to monitor the incident. There is no indication the disruption was malicious in nature at this time.'

Earlier in the evening, U.S. Customs and Border Protection revealed on Twitter that they were experiencing a 'temporary outage with its processing systems at various air ports of entry & is taking immediate action to address the technology disruption.'

The outage had impacted more than 10 major airports.

'CBP officers continue to process international travelers using alternative procedures until systems are back online. CBP officers are working to process travelers as quickly as possible while maintaining the highest levels of security.'

Revolutionary flying drone taxi hovers 150ft above Seoul river to show what it can do.

Revolutionary flying drone taxi hovers 150ft above Seoul river to show what it can do...