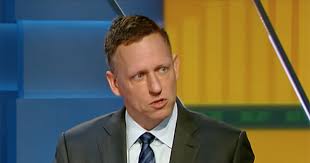 Billionaire Tech investor Peter Thiel has warned that Google is aiding the Chinese military, and that the company needs to be investigated by the FBI and the CIA because it is manned by "globalists" who do not understand the threat to the US that China poses.

Thiel described Google's political culture as "globalist, "post-national," and "cosmopolitan," adding that the company is "incredibly insular" and "incurious" about real "problems" outside of its own silicon valley bubble.

Thiel called for US intelligence agencies to get involved as Google is indirectly providing the Chinese government with cutting edge AI technology.

"The question about Chinese interest in [Google's artificial intelligence development] is one that needs to be looked at much more carefully. That's why I've argued that the FBI or the CIA should be looking at this." Thiel noted in an interview with Fox News.

"I think it is unprecedented in the last 1000 years or ever that  major U.S. company refused to work with the U.S. military and has worked with our geopolitical rivals. This is not a liberal-conservative thing. This is absolutely unprecedented." the entrepreneur continued, referring to the fact that Google refused to bid on the Department of Defense's $10 billion JEDI contract last year, on the grounds that working with the U.S. military could violate its "AI principles."