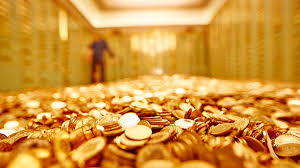 Mexico's Federal Mint Headquarters was looted yesterday during the day, with armed thieves making off with invaluable items, including gold coins, from a vault, according to Reuters and the South Wales Guardian. The incident happened at a "Casa de Moneda" branch located in Mexico City, which as we reported last week has succumbed to the deadliest violence on record.

City Public Security Secretary Jesus Orta Martinez was quoted on Mexican news as saying that that three armed men disarmed security guards at the offices and, in a scene right out of the movie Heat, "went straight to the vault, which was open."

"The line of investigation...is that there were deficiencies in the security protocol," he continued.

"It is striking that they went directly to the vault, and that they easily removed, or stole, coins... and commemorative watches."

The armed robbers were described  as "clean cut, young looking men" and are said to have stolen gold coins, watches and other valuables. One robber reportedly filled a backpack with 1,567 gold coins, each of which are valued at about $1,610, according to Mexican bank Banorte. This would put a price of at least $2.5 million on the robbery. Local Mexican media is reporting that the stolen items were worth up to 50 million pesos, or about $2 million U.S.