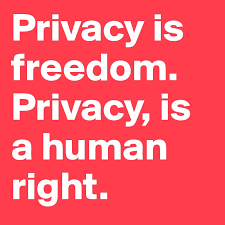 Privacy is a basic human right. It's there in Article 12 of the Universal Declaration of Human Rights: "Freedom from Interference with Privacy, Family, Home and Correspondence." Attaining that right in an era of dragnet surveillance, mass data breaches, state-sponsored hacks and big tech overreach, however, is a Herculean task. As the digital privacy fight heats up, crypto protocols are emerging as a new battleground where the right to anonymity will be won and lost.

From Data Drought to Tsunami in 40 Years Yes, all of it. Today, your home router connects more devices than the entirety of Arpanet did in the early 70s. Long gone are the days when the connections that comprise the world wide web could be sketched on the back of a napkin. As the internet has proliferated and the number of connected devices has grown into the millions, and then billions, so has the amount of data produced. 90% of all the world's data was generated in the last two years, with 33 zettabytes created in 2018 alone (one zettabyte equals one trillion gigabytes). By 2025, we'll be creating 175 zettabytes annually, and will have another 15 billion devices online, largely thanks to IoT.

Data, we are often told, is like oil, serving as the lubricant that greases the web economy. If that analogy is true, we are a long way from reaching peak data. Peak oil, by comparison, is calculated to have occurred as early as 2006 and broadly agreed to occur no later than 2030. We are running out of oil, but demand and supply of data shows no sign of abating. Its ubiquity may account for why we have become so laissez-faire about protecting it. Should our credit card details be stolen, we simply cancel it and order another one; our password exfiltrated, we shrug and create a stronger one. This casual attitude to the loss of a resource that is, to all intents and purposes, invisible, accounts for why the world has sleepwalked into the data dystopia in which it now finds itself.

But as Edward Snowden memorably put it: