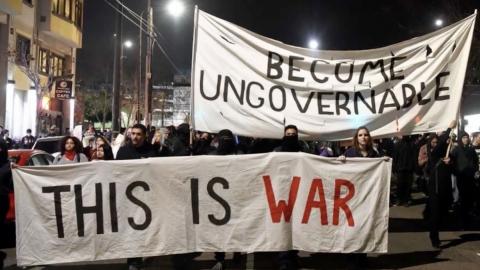 Just as Mike Adams, the Health Ranger, has long been predicting, the domestic terrorist group Antifa ("anti-fascists") is now firebombing government buildings in protest of conservative "Nazis" – and the mainstream media is nowhere to be found in reporting on these heinous crimes because they don't fit the anti-Trump narrative of the leftist fake news.

Using one of those dreaded AR-15 "assault weapons," no less, an Antifa cult member by the name of Willem Van Spronsen, age 68, was recently caught firebombing an ICE (Immigration and Customs Enforcement) facility in Tacoma, Washington, because he apparently thought that it was one of those nonexistent "concentration camps" that fake news outlets such as CNN and MSNBC have been telling their liberal viewers are "caging" migrant children.

Van Spronsen reportedly released a manifesto just prior to his act of terrorism that stated, "I am antifa," indicating that he was clearly motivated by fake news rhetoric to fight the "fascists" through extreme violence.

Only one local news outlet in Washington state bothered to report on the incident, revealing that Van Spronsen was shot and killed before he could do even more damage. Meanwhile, leftists all over social media praised Van Spronsen's act of terrorism – this worshiping of leftist violence apparently being in full compliance with the "community standards" of Big Tech.

Heavy also reported on the incident via its website, explaining that Van Spronsen was "an anarchist and anti-fascist from Washington" who tried to "set fire with incendiary devices" to the ICE facility in question.

"Authorities say Van Spronsen was armed with a rifle and threw 'lit objects' at buildings and vehicles in the parking lot of the Northwest Detention Center," the Heavy report goes on to explain. "Van Spronsen, a Vashon Island musician affiliated with the Puget Sound Anarchists and local antifa groups, was shot and killed by Tacoma Police officers, the Seattle Times reports. No one else was injured."

For more stories about Antifa violence that you won't hear about from mainstream news sources, be sure to check out LiberalMob.com.