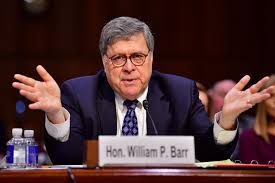 Trump hailed Barr as "one of the most highly respected lawyers and legal minds in the country." Sen. Lindsey Graham (R-S.C.), the chairman of the Senate Judiciary Committee, said Barr has "an impeccable reputation" and is "a man of the highest integrity and character." But almost no one in Washington had any questions about Barr's legal crusade for blanket immunity for federal agents who killed American citizens.

After he was nominated, Barr received a routine questionnaire from the Senate Judiciary Committee asking him to disclose his past work, including pro bono activities "serving the disadvantaged." The "disadvantaged" that Barr spent the most time helping was an FBI agent who had slain an Idaho mother holding her baby in 1992. Barr spent two weeks organizing former attorneys general and others to support "an FBI sniper in defending against criminal charges in connection with the Ruby Ridge incident." He also "assisted in framing legal arguments advanced … in the district court and the subsequent appeal to the Ninth Circuit," he told the committee.

That charitable work (for an FBI agent who already had a federally paid law firm defending him) helped tamp down one of the worst scandals during Barr's time as attorney general from 1991 to early 1993. Barr was responsible for both the U.S. Marshals Service and the Federal Bureau of Investigation, two federal agencies whose misconduct at Ruby Ridge "helped to weaken the bond of trust that must exist between ordinary Americans and our law enforcement agencies," according to a 1995 Senate Judiciary Committee report.