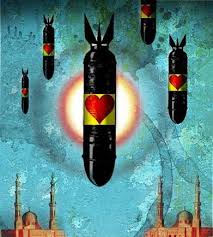 There is a disturbing trend in some libertarian circles and among some libertarian organizations to be increasingly enamored with foreign interventionism and US government backed regime change overseas. For those focused on foreign affairs, this is particularly troubling as it is abandoning a key tenet of libertarianism: non-interventionism.

Not "your government 6,000 miles away must be changed… but I don't support the US military doing it." That is not non-interventionism.

Non-interventionism is accepting that others may wish to live in a way you may not approve of.

Non-interventionism in your neighbor's affairs – whether he enjoys reading the Bible or lighting up a marijuana cigarette (or maybe both) – is really the sine qua non of the libertarian mindset: "aint nobody's business if you do." You do not aggress against your neighbor just because you disagree with his life choices that do not infringe on your person or property and you extrapolate that dynamic to where you demand that to the highest extent possible your local, state, and federal governments treat you as you would treat your neighbor.

The idea that this critical impulse somehow becomes null and void when it comes to international affairs is truly bizarre. In fact many self-described libertarians full-throatedly cheer when people are in the streets thousands of miles away trying to overthrow their governments. Somehow from this far distant vantage point they are just convinced that the mythical "free state" is about to break out somewhere.

And when someone points out that the semi-hidden hand behind these uprisings is the US government, which seeks to create overseas governments of subservient elites to prop up the (anti-libertarian) US empire, they accuse that person of being an extremist or a conspiracy theorist…or they get really lazy and stupid and just claim you are a "supporter" of the dictator of the day.

So, many US libertarians (who knew next to nothing about Venezuela) demanded our support for that great "libertarian" liberator of Venezuela, Juan Guaido, who turned out to be just another crook with zero support from Venezuelans (but a lot of support from the CIA!).

They ignored the murky ties of Guaido and his compadres to the US government and its nearly 20 year effort to overthrow the Venezuelan government.

In fact even Washington DC's flagship "libertarian" think tank, the Koch-funded CATO Institute, is hosting "regime change" conferences aimed at the overthrow of the Venezuelan government. Just this week, for example, they hosted a "What's Next for Venezuela?" conference where, sadly, the conclusion was not that we end sanctions and engage the country with trade and friendship – the libertarian approach – but rather it was the authoritarian approach that we must change the Venezuelan government.

Thinking About Libertarian Resistance During the Statist Deluge

Libertarian Reformers vs. the Non-Aggression Principle

The Future of Freedom