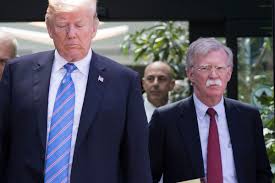 Iran's foreign minister, Mohammad Javad Zarif, has said that his nation will negotiate with America—if the Trump administration will lift sanctions, the hallmark of its "maximum pressure" campaign. To do so would be an admission of defeat, certainly. But so far, President Donald Trump's policy toward Iran has been a spectacular failure, marked by highly erroneous premises, hysterically high expectations, and dramatically counterproductive consequences.

The president apparently believed that threatening war and the "obliteration" of Iran would win concessions when he called for talks. National Security Adviser John Bolton said the president "held the door open to real negotiations." Indeed, he added, "all that Iran needs to do is walk through that door." At times, the president appeared to be begging the Iranians to call.

However, though claiming that he wanted negotiations, Trump also made them nearly impossible and risked starting a potentially disastrous war. Currently, a single mistake or misjudgment by an aggressive American or Iranian sailor or airman could inadvertently trigger a conflict. In order to bring back diplomacy, Washington needs to overhaul its policies.