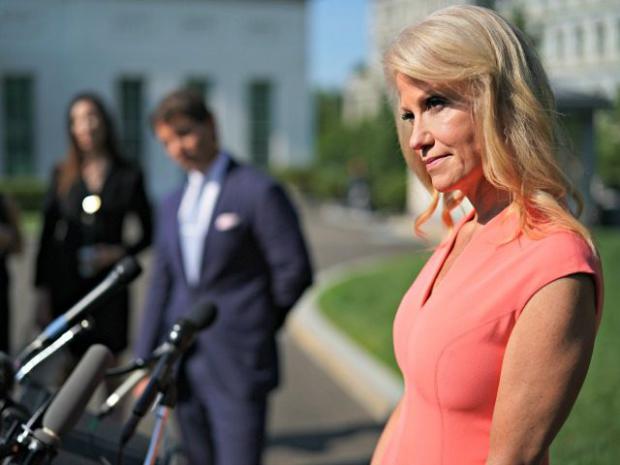 White House adviser Kellyanne Conway became the latest in the Trump administration to dismiss a congressional subpoena Monday, as Conway officially refused a legal order to testify before the House Oversight Committee. Counsel to the president Pat A. Cipollone wrote in a letter to the committee that President Donald Trump had "directed" Conway not to appear at the hearing, which concerned reports that Conway violated the Hatch Act. "The subpoena appears to seek testimony from Ms. Conway concerning her service in the White House," Cipollone wrote. "As you know, in accordance with long-standing, bipartisan precedent, Ms. Conway cannot be compelled to testify before Congress with respect to matters related to her service as a senior adviser to the President."

The latest legal clash between Congress and the White House comes after Conway had previously refused a non-binding request to appear before the Oversight Committee, which is investigating Conway's alleged violations of the 1939 law barring government employees from participating in political speech. Office of Special Counsel chief Henry Kerner called in June for Conway to be fired for her "unprecedented" and repeated comments violating the Hatch Act, including openly blasting 2020 Democratic candidates and tweeting messages in favor of Republican candidates ahead of the 2018 midterms. "Her defiant attitude is inimical to the law, and her continued pattern of misconduct is unacceptable," the OSC wrote in a report submitted to Trump. The White House, meanwhile, continues to deny the notion that Conway violated the Hatch Act, with White House Press Secretary Stephanie Grisham decrying the "ill-founded" and "phony" allegations in a statement Monday. "Today, Chairman Cummings and Democrats on the House Oversight Committee continued their purely political campaign to harass the president and his close advisors," Grisham said. "Democrats continue to overreach and politicize the Office of Special Counsel — this time, by trying to silence Kellyanne Conway with ill-founded, phony allegations about the Hatch Act." (Trump has already made it clear he won't be firing Conway over the violations, defending the adviser as a "tremendous spokesperson" and saying of the allegations, "It looks to me like they're trying to take away her right of free speech.")

House Democrats are still hellbent on forcing Conway to testify, dismissing the claim that Conway is "absolutely immune" from congressional subpoenas as "completely baseless." Committee chairman Rep. Elijah Cummings said Monday that the committee will vote to hold Conway in contempt by July 25 if she still has not complied with the subpoena. "We are not requiring her to testify about advice she gave the President or about the White House's policy decisions," Cummings said in a statement.