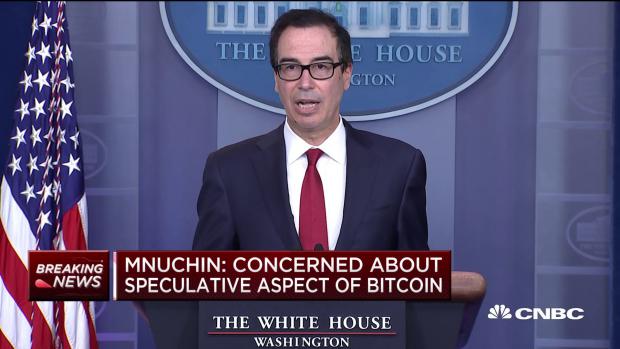 Treasury Secretary Steven Mnuchin has concerns about Facebook's proposed cryptocurrency and its potential illicit use.

In a press conference Monday, Mnuchin said Facebook's planned digital currency "could be misused by money launderers and terrorist financiers" and that it was a "national security issue."

"Cryptocurrencies such as bitcoin have been exploited to support billions of dollars of illicit activity like cyber crime, tax evasion, extortion, ransomware, illicit drugs and human trafficking," Mnuchin said, adding that he is "not comfortable today" with Facebook's launch.

The press conference comes days after President Donald Trump said in a tweet that he was "not a fan" of cryptocurrencies like bitcoin. He also suggested Facebook, which plans on launching the global cryptocurrency next year, would need a bank charter to do so. Bitcoin dropped sharply on Monday following the president's criticism on Twitter. The world's first and most valuable digital currency fell roughly 10% to a low of $9,872 to start the week.