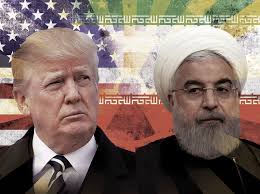 My initial thoughts on this centered on Russia. And Russia's affirmation of its relationship with Iran saw Trump begin a pivot towards a different strategy than one of direct confrontation.

He went to North Korea after the G-20 in Osaka, meeting with DPRK Leader Kim Jong-Un to advance his relationship there.

He's mostly kept his mouth shut on Iran other than a little obvious Twitter-rattling about 'annihilation' if Iran attacks any U.S. asset.

So, it seems that Trump himself is ready to alter the trajectory of his foreign policy. The problem is, as has been pointed out repeatedly, these actions have empowered all manner of other actors to commit provocations which Trump will have to respond to at some point.

Case in point the seized oil Iranian oil tanker by British marines at Gibraltar. This is purely outrageous behavior. And the details of the seizure itself are highly suspect. Claims that the tanker was headed for a Syrian port which can't even berth a tanker of that size are a dead giveaway.