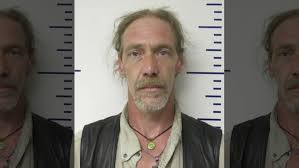 The stop took place in Guthrie, which is about 30 miles north of Oklahoma City.

The stop was made at about 11AM for an expired tag. Jennings was in the driver's seat, Rivera was in the passenger's seat and their "pet Timber rattlesnake" was in the backseat, in a terrarium.

Jennings told police he had a gun in the console right around the same time the vehicle was reported as stolen.

"When that happens of course, we call in a company that deals with that specifically and it`s taken safely into possession. The uranium is the wild card in that situation."