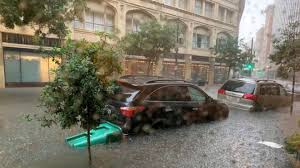 Storm in Gulf of Mexico has officially become Tropical Storm Barry, and is expected to become hurricane

Mandatory evacuation issued 6am Thursday for as many as 10,000 people in Plaquemines Parish in Louisiana

Storm is set to deposit between 10 to 15 inches of rain on Gulf Coast from west Texas, through Louisiana coast

New Orleans has been hit by devastating storms before, including 2005's Hurricane Katrina which killed 1,833