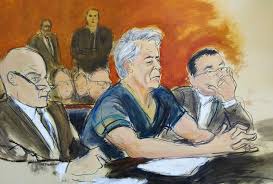 The Trilateral Commission was the principal architect of Sustainable Development and Agenda 21, using the United Nations to blanket the planet. The UN has had its own share of sexual scandals as well. ? TN Editor

For decades, Jeffrey Epstein, the finance whiz who has been charged with sex trafficking, moved with open ease between the planet's highest echelons of power and what prosecutors portray as a sordid world of recruiting and sexually abusing teenage girls.

He met with leaders of the nation's top universities and research labs, traveled with presidents and princes, and managed money for leading business figures. He said the minimum investment he would handle was $1 billion.

Even as dozens of women were looking to police, prosecutors and courts to hold Epstein to account for his alleged sexual abuses, he was amassing a stunning list of contacts and, in some cases, defenders across the worlds of Hollywood moviemaking, medical research, diplomacy, finance, politics and law.