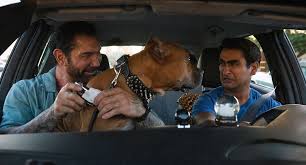 Despite Stuber's flaws, the star of The Big Sick makes an entertaining Uber driver.

It's been a little while since Kumail Nanjiani's standout turn in 2017's The Big Sick, the comedian's compelling semi-autobiographical comedy about an interethnic couple. Two years later, Nanjiani stars as an awkward Uber driver in Stuber, an action comedy with a vaguely similar odd-couple conceit. But with its frantic gun fights and car-related banter, it lamely falls short of the same brilliance.

This involves chaperoning Vic to various shady locations as he attempts to avenge the death of his young-and-promising partner, Sarah Morris (Karen Gillan). Gillan's chance to shoot a gun outside Guardians of the Galaxy lasts minutes before Morris is quickly taken out in a dizzying shoot 'em up. Even the likes of Line of Duty attempted handheld shakiness better. Morris' murderer, Oka Teijo (Iko Uwais), is an all but generic drug dealer, except for his surprising skill at some form of martial arts.

Why does an Uber driver risk his life for a rampaging, irrational cop? For the mildly amusing reason that Vic threatens to give Stu a bad Uber star rating, which could see Stu lose his side-job. While the events that lead up to Vic needing an Uber driver in the first place are ludicrous -- he decides to drive his own car immediately after eye surgery and unsurprisingly crashes -- their unlikely partnership somewhat successfully provides an emotional backbone. This is amid the colorful insults.