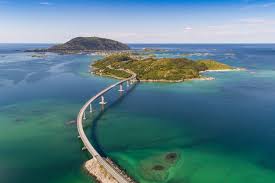 An island in Norway wants to cut ties with the clock so residents are free to mow their lawns at 4 a.m.

couple of weeks ago, a "lighter side of the news" story broke that was compelling in a way that transcended virality, breaking loose into the realm of metaphysics: there is a Norwegian island called Sommarøy, and it wants to "erase the concept of time." The northern Norway island, which has around 350 residents, is in constant darkness from November to January, but experiences perpetual sunlight from May to July (its name translates as "Summer Island" — obviously derived from the only possible time of year you'd want to go). A local man named Kjell Ove Hveding, who for whatever complex biographical or psychological reason has found himself at the head of the "Time-Free Zone" campaign, handed his petition calling for the abolition of time to his local member of parliament, conservative Kent Gudmundsen, last month.

The Sommarøy Time-Free Zone campaign is like some sort of philosophical idealist's dream: finally, we will be able to prove that one of the basic categories structuring what we call "reality" is in fact completely made up.

But what is it that the residents of Sommarøy want to abolish, exactly? "All over the world, people are characterized by stress and depression," Hveding has stated. "In many cases this can be linked to the feeling of being trapped, and here the clock plays a role. We will be a time-free zone where everyone can live their lives to the fullest."

"Our goal is to provide full flexibility," Hveding said. "If you want to cut the lawn at 4 a.m., then do it." In Sommarøy, residents claim, playing soccer or drinking a coffee on the beach at 2 a.m. is simply a normal thing that one does, and they want to stop feeling like they have to apologize for it.

And so far from wanting to abolish time wholesale, there is at least one sense in which the residents wish to keep it exactly the same. In the Critique of Pure Reason, Kant — whose understanding of time has been decisively influential for most philosophy — defines time as "inner sense" (thus contrasting it with space, the "outer sense"), a "subjective condition of our (human) intuition" which is required to be able to represent motion and alteration. "Only in time can two contradictorily opposed predicates meet in one and the same object, namely, one after the other," he says. Kant, incidentally, was a "transcendental idealist" — which meant that he didn't think that things like time were "real" in the sense that they exist in the world outside us, just necessary for us to be able to represent reality to ourselves. So while time might not be real as such, we still can't do anything to change it.