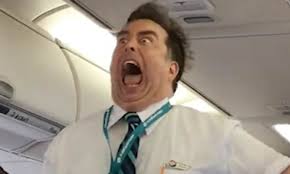 He humoured the Westjet flight from Alberta, Canada, to Arizona last month

Straight-faced and sharply dressed air hostesses gesturing towards the plane's emergency exits are what most passengers expect from the routinely serious safety briefing which kicks off all flights.

But one flight attendant soared above and beyond to deliver a side-splittingly silly demonstration which infected the cabin with fits of laughter.

He humoured the Westjet trip from Alberta, Canada, to Arizona with a slapstick act which saw him struggle to fasten the seat belt and yank the oxygen mask down like a madman before 'accidentally' pinging himself with the elastic.