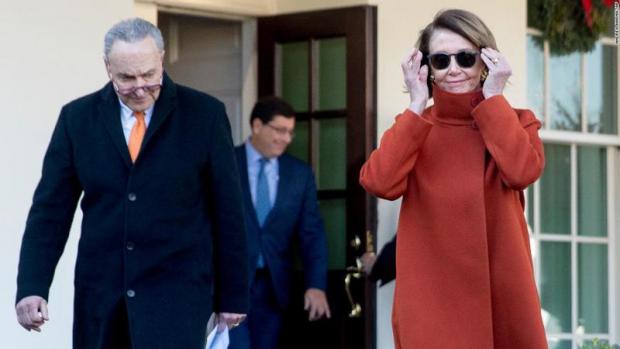 A chain of events set off by Senator Chuck Schumer (D-NY) over competing border funding bills served to undermine his longtime ally, House Speaker Nancy Pelosi (D-CA) - a rare rift between the old friends which may put a strain on their working relationship in the months to come, according to The Hill.

The wheels started turning when Schumer became one of 33 Democrats to vote for the bipartisan Senate bill, even though Pelosi had let Senate negotiators know that she wanted to make important changes to the legislation.

The strong Democratic support for the Senate spending bill then emboldened a group of moderate House Democrats to balk at changes favored by Pelosi and House liberals that would have put greater restrictions on money headed to the border to better protect migrants. -The Hill

Pelosi, faced with an internal revolt, caved to pressure and eventually accepted the Senate bill despite her objections over what she felt were insufficient protections for migrants.

"This seems to be the only time I can remember in the last two years or three years where Sen. Schumer and Speaker Pelosi were not on the same page," a House aide told The Hill, who added that a broad swath of Democrats are sour at Schumer for undercutting their position. The aide referred to it as a "unique situation," however, since many moderate House Democrats favored the Senate's bill as well.

"I don't think it will be repeated again," said the aide. "The things coming down the pipeline are much bigger, more fundamental issues," referring to upcoming negotiations between the three branches of government over the debt ceiling.

The aide predicted that it would be difficult for Senate Majority Leader Mitch McConnell (R-Ky.) to "jam the House on a $1.3 trillion spending bill."

"There are so many equities involved on both the House and Senate Democratic sides it's unlikely the House Democratic position could be ignored," the aide added.

A Pelosi spokesman offered a similar assessment, noting the unique dynamics of the migrant debate coming amid news of horrific conditions at the border — news that broke after the Senate had advanced its bill through committee. -The Hill

According to the aide, the upcoming debate over the debt ceiling will be "totally different," since Democrats are far more aligned on their priorities on this issue, while Republicans are divided over the issue.

"There are different leverage points on that," said the aide. "In those talks, Schumer and Pelosi have been in lockstep."

Pelosi needs to be more proactive in order to avoid being railroaded again by the Senate, according to longtime Republican clerk and House Appropriations Committee staff director, Jim Dyer, who said "It might serve as a lesson about the importance that when two bodies are negotiating on these things that you've got to get yourself in earlier."

Pelosi's poor grasp of the situation and Schumer abandoning her gave a decisive victory to Senate Majority Leader McConnell, who said last Thursday "I'm proud of the Senate for stepping up, passing a bill 84 to 8, that's as bipartisan as it gets around here, to deal with the humanitarian crisis at the border. We did not in the end continue to play these political games over this humanitarian crisis. They did and it's their problem to resolve."