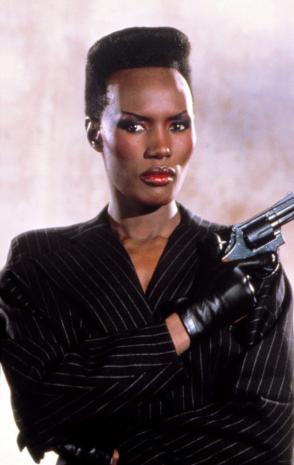 THE troubled James Bond film has suffered another blow after Grace Jones quit her much-hyped role moments after arriving on set.

The diva, 70, who played iconic villain May Day in 1985's A View To A Kill, walked away from the movie after discovering how few lines she'd been given.

Grace Jones was unhappy about how small her part in the new Bond film is.

Boss were left frustrated after wasting precious time and money securing a luxury residence for her to stay in near Pinewood Studios in Buckinghamshire.

A source said: "Grace's 007 homecoming was meant to be a real crowd-pleasing moment. Bosses were really excited about landing her.

"Of course, she comes with a reputation, so they organised premium accommodation and rolled out the red carpet on set to make her feel welcome.

"But it turns out Grace was expecting to play a bigger role in the movie and took her brief cameo as a slight.

"She was out of there quicker than it takes to rustle up a martini."

Grace's cameo, thought to involve a scene opposite Daniel Craig, was first rumoured back in April.

It's the latest setback to befall Bond 25, which earlier this month was rocked by three huge explosions on set.

Rick Moranis tells NYPD cops to 'catch the bad guy' after the...

Elon Musk: The Scientist Behind the CEO (and How He Teaches Himself) Documentary