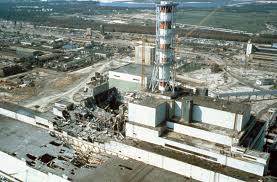 SPOILER ALERT: If you have not yet seen the excellent HBO miniseries Chernobyl and might yet do so, you might want to wait to read this article until after you have seen the series, as it contains spoilers.

The five-part series documents the catastrophic nuclear explosion that took place at a nuclear power plant in the Soviet Union in the 1980s, an event that threatened the lives and health of millions of people, not only in the Soviet Union but also in Europe. The series documents the heroic life-endangering efforts of thousands of people in an effort to resolve the crisis with the least amount of damage and loss of life.

The most powerful part of the series occurs in part 5.

Whenever power plant officials conducted tests on the system, everyone knew that there was a failsafe button in the event that everything went wrong with the test and an explosion became imminent. All that the power plant people had to do was push the failsafe button and the entire plant would come to a halt. The reason was that the button activated the introduction of control rods containing boron into the fissioning uranium, which would cause the entire system to be immediately shut down.

To save money, Soviet officials had used graphite in the rods. In the 1970s, a Soviet nuclear scientist wrote an article stating that the graphite would serve as an accelerator, not a suppressant, of an impending nuclear explosion. He wrote that it was imperative that all the control rods be replaced immediately.

Soviet authorities redacted the warnings and buried the report as a national-security-state secret. Thus, when the testing at Chernobyl went out of control, the managers at the plant, who were relying on the failsafe button, had no idea what was going to happen when they pushed the failsafe button, which they did. The result was a massive ongoing and out-of-control nuclear explosion.

After the crisis was brought under control, the Soviets continued to maintain as much secrecy as they could, first with a secret show trial of the plant managers and then by trying to prevent any evidence of state involvement in the disaster through the use of the defective control rods and the suppression of the 1975 warnings from the nuclear scientist.

At the trial, one of the Soviet officials responsible for resolving the crisis refused to be silenced. In his powerful testimony, he pointed out that the Soviet Union was based on two things — secrecy and lies, which was the primary cause of the disaster. For speaking the truth, he was prohibited from working again in the Soviet nuclear industry and was ostracized by Party officials. He committed suicide two years later.

As I watched that moving scene, it occurred to me: secrecy and lies! Why, that is precisely what the U.S. government has been based on ever since it was converted into a national-security state after World War II. In fact, in many ways the U.S. national-security establishment has come to bear many of the characteristics of the Soviet Union.

Look at how they are treating Edward Snowden, Julian Assange, and other people who have revealed the dark secrets of the deep state. They aren't alleging that such people have lied. They are acknowledging that they revealed the truth about the national-security state. That's why they want them punished — for revealing the truth to people.

Edward Snowden, for example, revealed the massive illegal surveillance scheme that the NSA was conducting on the American people. He didn't lie about. He disclosed the truth about it. That was his "crime" — speaking the truth to people about what the NSA was doing.

On the other hand, when former Director or National Intelligence James R. Clapper, Jr. was asked by Congress whether the NSA was conducting such secret surveillance on the American people, Clapper knowingly, intentionally, and deliberately lied, under oath. Of course, when he lied to protect the secret, he never dreamed that Snowden or anyone else would reveal the truth.

After Snowden revealed the truth, Snowden was vilified as a bad guy, while Clapper, who of course was never indicted for perjury or contempt of Congress, was celebrated as a good guy who was "keeping us safe." While Snowden was forced to live a life of exile in Russia to avoid incarceration or execution in the United States as a "traitor," Clapper became a popular political commentator.