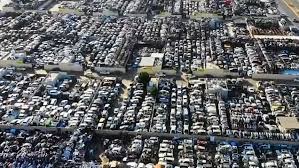 Supercars and luxurious classic motors are covered in desert dust in one of the world's most expensive car graveyards in the Gulf.

Ferrari, Rolls Royce, Bentley, Range Rover and Lamborghini are among the brands on display at the Sharjah yard not far from Dubai city centre.

The heat and grime of the desert have taken their toll on the expensive vehicles but they are still sought after for their parts.

Most of their owners are believed to be expats who fled the UAE years ago after they defaulted on loans and left the cars behind.

While many cars are in dilapidated condition, some are still well-preserved enough to provide parts at knock down prices to savvy buyers.

After the financial crash in 2012, many British citizens fled Dubai finding their incomes could no longer keep up with their lavish lifestyles.

Harsh penalties for unpaid debts under Sharia law meant some of the expats left in such haste they simply abandoned their sportscars at the airport.