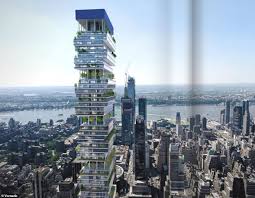 While construction on the high-rise, dubbed Penn15, has yet to begin, new artist renderings reveal how the building will alter Manhattan forever.

The spectacular structure will reportedly stand nearly as tall as the the Empire State Building, but it boasts a more modern aesthetic, aimed at luring in tech giants to be its primary tenants.

Facebook was reported to be one company considering a move to Penn15, and the new renderings show how the social media giant's headquarters would look inside the stunning building.

While Mark Zuckerberg has made no official announcement, it's now believed Facebook may have passed on housing their offices in the skyscraper, as they have just leased space at nearby One Madison Avenue.

In a statement, they told DailyMail.com: 'New York has a strong tech community and is a great home for Facebook. While we constantly reevaluate our facilities needs, we don't have anything new to share about our plans in New York at this time'.