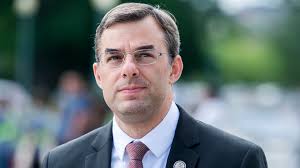 In Washington, D.C., he's been labeled "loser," accused of being a secret Democrat, and ostracized from the legislative caucus he co-founded, but on Monday night Rep. Justin Amash (R–Mich.) found himself in friendlier territory—and embraced the opportunity.

At a town hall in Grand Rapids, Michigan, Amash's constituents gave him applause and praise—but also fired pointed questions from left, right, and center political perspectives—during a nearly two-hour meeting marking the congressman's first public appearance since tweeting that he believed President Donald Trump had engaged in "impeachable conduct." It was the sort of spectacle that's all too rare in politics today; a (mostly) respectful, detailed discussion of policy, politics, and the balance of power in the federal government.

If you had never heard of Amash before, it was a perfect introduction to his views on just about every significant issue. If you are familiar with him, it was a standout performance.