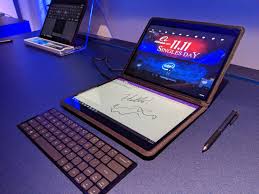 The company had dual-screen versions of productivity and gaming laptops.

Laptops have gotten thinner and smaller, but their basic design hasn't really radically shifted. Intel thinks that will change within two years.

At Computex 2019, the chipmaker brought several proof-of-concept devices that show what laptop makers like Asus, Dell and HP can do with its tech. The common denominator across the devices? Dual screens. Keyboards, it seems, will soon be so 2019.

First up is the Ultrabook concept, Twin Rivers, a futuristic take on thin-and-light laptops like the Dell XPS. It combines two 12.3-inch touchscreen displays, with the bottom display having an on-screen keyboard, like one you get on a tablet. However, the concept also comes with a physical bluetooth keyboard that fits atop the display for longer sessions.

This concept isn't unheard of. Lenovo's Yoga Book series is comprised of laptops that have onscreen, e-ink keyboards rather than a physical one. Jim Johnson, general manager at Intel, told me attachable keyboard design was inspired by feedback from Lenovo. He also said we'd see designs like this on the market "imminently," but another Intel rep gave a more tempered "one to two years" timeframe.