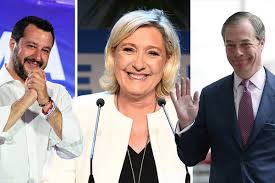 Let's take a look at the centrist carnage starting with a comparison to 2017.

Centrist Parties are the Biggest Losers

?The centre-left and centre-right blocks are the biggest losers. They will no longer hold a majority in parliament. The current projection from the European parliament is that, between them, those blocks will end up with a total of 329 seats out of 751.

The far right had modest gains overall, but did very well in Italy and France. In Italy, Matteo Salvini's League romped home, with 28 seats. Second was the socialist PD on 19 seats. In France Marine Le Pen's National Rally party took 22 seats, ahead of Emmanuel Macron's Renaissance coalition with 21. In Hungary, Viktor Orbán's Fidesz party took more than half the vote, winning 13 seats, more than three times that of the next party. Those who would group Nigel Farage's Brexit party under the far-right banner point to his stunning 29-seat win in the UK.